Important: On OS X you must set the Xcode command line tools preference as follows: 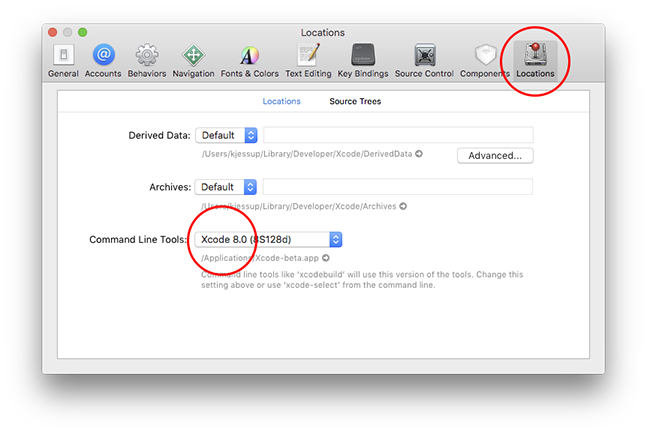 If you do not do this you will experience compile time errors when using SPM on the command line.

Perfect is an application server for Linux or OS X which provides a framework for developing web and other REST services in the Swift programming language. Its primary focus is on facilitating mobile apps which require backend server software, enabling you to use one language for both front and back ends.

Perfect operates using either its own stand-alone HTTP/HTTPS server or through FastCGI. It provides a system for loading your own Swift based modules at startup and for interfacing those modules with its request/response objects or to the built-in mustache template processing system.

Perfect is built on its own high performance completely asynchronous networking engine with the goal of providing a scalable option for internet services. It supports SSL out of the box and provides a suite of tools which are commonly required by internet servers, such as WebSockets and iOS push notifications, but does not limit your options. Feel free to swap in your own favorite JSON or templating systems, etc.

Ensure you have properly installed a Swift 3.0 toolchain from Swift.org. In the terminal, typing:

Perfect relies on Home Brew for installing dependencies on OS X. This is currently limited to OpenSSL. To install Home Brew, in the Terminal, type:

Perfect relies on libcurl and OpenSSL:

The following will clone and build an empty starter project and launch the server on port 8181.

You should see the following output:

This means the server is running and waiting for connections. Access http://localhost:8181/ to see the greeting. Hit control-c to terminate the server.

You can view the full source code for PerfectTemplate.

Swift Package Manager can generate an Xcode project which can run the PerfectTemplate server and provide full source code editing and debugging for your project. Enter the following in your terminal:

Open the generated file "PerfectTemplate.xcodeproj". Ensure that you have selected the executable target and selected it to run on "My Mac". You can now run and debug the server.

Begin by downloading and accessing our code examples on GitHub, and take advantage of the tutorials provided by members of the Perfect community.

Do you require documentation? No problem. Access our reference materials here.

If you need troubleshooting support, we’ve got you covered.

We welcome your feedback about Perfect. Let us know what additional features you’d like to see added to it.
Do you have questions about Perfect? Please visit our FAQs page.